When And Where Was William Shakespeare Born? The
Bard's Timeline And Life Facts

WILLIAM SHAKESPEARE IN THE DIGITAL AGE: The volume of global queries about William Shakespeare's timeline and life facts can be traced through Internet searches. Google reports almost 14,000 online global users a month who ask, 'When and where was Shakespeare born?'

*WILLIAM SHAKESPEARE'S BIRTH AND LIFE FACTS ACCORDING TO GOOGLE SEARCH

The number of people worldwide who Google the question, “When was Shakespeare born?” each month.

The number of people worldwide who Google the question, “Where was Shakespeare born?” each month.

The number of people worldwide who Google the phrase, “William Shakespeare facts” each month.

*All figures for “William Shakespeare's Birth And Life Facts According to Google Search”, supplied by Google. Stats include global totals for laptop and desktop computers and mobile devices.

VERY FEW FACTS are known about the life of English playwright William Shakespeare, and so what info we do have about him is endlessly scrutininsed by each generation. By Ben Arogundade. 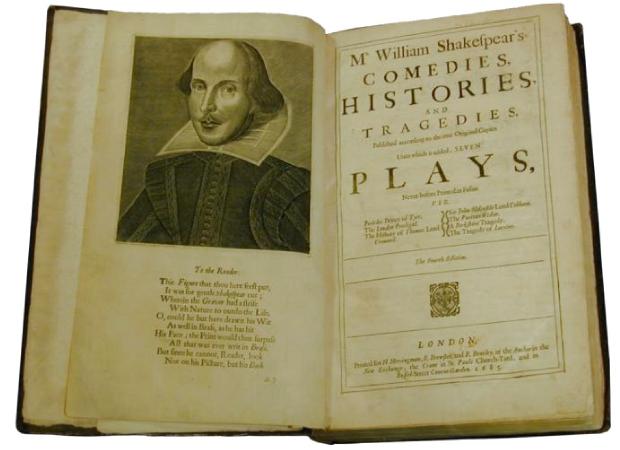 WILLIAM SHAKESPEARE is literature's most elusive figure. To this day, very little is known about him. Basic facts, such as when and where he was born, only wet our appetite for more — but questions about his life, sexuality, education, marriage and character remain unanswered. Despite 400 years of detective work and speculation by generations of scholars and literary detectives, the Bard’s life remains a mystery, and probably will for all time. Here is a timeline of a few of the life facts we do have on England’s literary genius.

1564, April 23.
William Shakespeare was born in Stratford-upon-Avon, south Warwickshire, England. The precise date of his birth is unknown, but is presumed to be April 23, as it was customary for infants to be baptised three days after birth — his being on April 26.

Shakespeare’s mother Mary was a landowner’s daughter, and his father John was a glove-maker, moneylender, and one time Mayor of Stratford.

1569
William is thought to have first attended King’s New School, a local Stratford grammar school. He studied there until the age of fourteen.

1582, November 28.
At aged eighteen Shakespeare marries Anne Hathaway of Shottery, Stratford. She is eight years his senior and three months pregnant at the time.

1583, May 26
The couple’s first child, Susanna is baptised. She would live to the age of sixty-six.

1585
Anne gives birth to twins, Hamnet and Judith, named after two of Shakespeare’s close friends. They are baptised on February 2.

1592
Shakespeare leaves his family and re-locates to London, where he rapidly establishes himself as an actor and playwright. On September 3 author Robert Greene dies. He had previously complained about Shakespeare, calling him an “upstart crow”.

1593, March
Shakespeare’s first poem, Venus And Adonis is published. It is dedicated to his patron, Henry Wriothesley, the Earl of Southampton. In December, London theatres close due to an outbreak of the bubonic plague.

1594
London theatres re-open in the spring. Shakespeare joins the theatre troupe, the Lord Chamberlain’s Men, where he rises to prominence as their most gifted writer. In April he publishes The Rape of Lucrece, also dedicated to the Earl of Southampton.

1596, August 11
Shakespeare’s only son Hamnet dies, aged eleven, of unknown causes. His twin sister Judith would live to the age of seventy-seven. On October 20, Shakespeare’s father is awarded a Coat of Arms.

Shakespeare’s acting company moves to the Swan theatre, Bankside, after the authorities ban the public presentation of plays within the London area.

1598
Shakespeare and other members of his acting company finance the building of the Globe theatre in Southwark, along the banks of the River Thames. It is completed in 1599.

1600
Julius Caesar debuts at the Globe. Shakespeare’s play, A Midsummer’s Nights Dream, is registered on October 8.

1601
Shakespeare’s father dies. Around this time William writes Hamlet. His acting troupe, the Lord Chamberlain’s Men, are commissioned to stage Richard II at the Globe.

1603, May 19
Upon the death of Queen Elizabeth I, the Lord Chamberlain’s Men change their name to the King’s Men, in homage to King James, who ascends the throne. Troilus And Cressida is registered in February.

1609
An unauthorised volume of 154 of Shakespeare’s sonnets is printed by publisher Thomas Thorpe.

1611
Shakespeare leaves London and returns home to Stratford, where he spends his remaining years.

1613
Shakespeare composes his final plays. The Globe burns down, but is re-opened in 1614.

1616, March 25
Shakespeare, now seriously ill, revises his will. In the new draft he leaves his “second-best bed” to his wife, and £10 to the poor.

1616, April 23.
Shakespeare dies on his fifty-third birthday. His burial is recorded in the register of the Holy Trinity Church, Stratford, two days later.

1623
The First Folio of Shakespeare’s plays is published, featuring 36 of his 37 plays. Shakespeare’s wife Anne Hathaway passes away the same year.

The SHAKESPEARE MASHUP by Ben Arogundade is out now.

NEXT: WILLIAM SHAKESPEARE - 5 WAYS TO DIE

Shakespeare Introduced 2,000 New Words And Phrases Into The English Language.

NEW THEORY:
Was Shakespeare A Cripple? Did He Smoke Marijuana For Pain Relief?

Ira Aldridge, First Black Othello, Was Called 'An Unseemly Nigger' By The Press.

Laurence Olivier Played Othello In Blackface During Civil Rights. What Was He Thinking?

How Did William Shakespeare Die? The Five Theories.

The 13 Best 'Othello' Graphics Of All Time.

The 18 Most Memorable Othello Performances Of All Time.

Where Did The Idea For Shakespeare's 'Othello' Come From?

If Shakespeare Wrote 'Othello' Now, Would A Pair Of Panties Replace The Handkerchief?

Is Iago Gay In 'Othello'? Is His Evil Driven By Sexual Jealousy?

Shakespeare Introduced 2,000 New Words And Phrases Into The English Language.

Is This Really The Face Of William Shakespeare?

He Died At 53, But What Happened In Between? Shakespeare's Summary Timeline.

THE CULTURE OF SHAKESPEARE